As per usual, there's not much to say about last night's Project Runway because the designers are suh bo-ring. Talented, but bo-ring. We did like them being flown to Paris for their next challenge mainly because we heart Paris. We don't quite know what happened with the random French woman Tim Gunn introduced at Parsons Paris because we couldn't understand a word she said. Not a word. But it did end with Angela being put right back on a plane to America. Poor Angela. The challenge was to design something for an international jetsetter. Angie apparently misheard and designed something for an international babysitter... 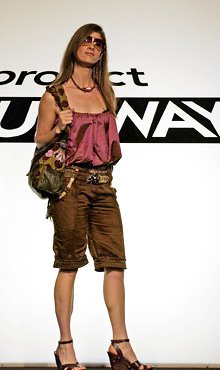 Ah, well. At least we still have the magic that is Vincent. And Kayne. And wake us when Michael wins.
Posted by The NB at 8/31/2006

By boring, you seem to be alluding that these people aren't nasty enough. Because I have to disagree, they are not boring, they just don't fight probably as much as you would like.

It's not so much that they don't fight as much as we'd like, which is true, it's that they're, well, boring. In the sense that if they were guests at your dinner party, your real friends wouldn't talk to you for the rest of the night. Because they'd have fallen asleep face-first in their vichyssoise.