Well, we thought it would be impossible to top the horror known as Crown Frankfurter Surprise, but, lo and behold, we did.

In 2004, it was announced that Warner Brothers would produce a musical based on Batman. Tim Burton would direct, David Ives would write the book and Jim Steinman would compose the music and pen the lyrics. Well, after Jim Steinman's Dance of the Vampires tanked, the project was placed on hold. Probably much to the relief of Burton and Ives. However, apparently it takes more than putting a show in limbo to keep Steinman from writing songs for it. So, now, if you will, please enjoy two ditties from the never upcoming Batman: the Musical:

Catwoman's Song, sung by whom we're going to have to assume is Catwoman and...

Wonderful Toys, sung by the Joker.

In true Steinman fashion, each song is approximately a year long, but please do not let that stop you from skipping to the end of the Joker tune—we're sure you've never heard anything quite like it. 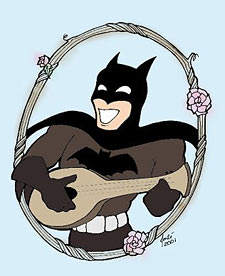