How to build the perfect Cylon.

According to an article on Slate.com today, there are approximately 10 billion podcasts created by the writers and producers of Battlestar Galactica, easily the best drama currently on television. We don't listen to podcasts because not only can't we deal with "podcast," but we also don't have time to listen to anyone else but ourselves speak. However, we bring you this information because...

If you really want to understand what makes Battlestar Galactica great, scroll through the iTunes list to the podcasts called "Battlestar Galactica Writers Meeting." These are four hours of unedited recordings from the writers' room, and they're fascinating, even for the uninitiated. The podcasts are like a master class in how to make good television.

If we did listen to podcasts, we'd totally listen to that one. But we don't, so we won't. Here's a pic of Bamber. 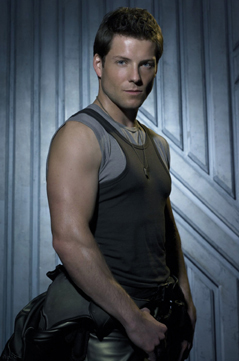