A kind sir and fan of this blog (!) invited us to a screening of the new Judi Dench/Cate Blanchett film, Notes on a Scandal, last night. Sick as we were, we went, because we are totally cheap. And we also love some Dench and Blanchett. And we adored screenwriter Patrick Marber's Closer. And the trailer was very promising, in a total campfest kind of way.

Now, we are in an awkward position here. We have two choices. We can tell you the film was superb with the hope that we will be invited to more screenings. Or we can tell you the film was disappointing with the hope that honesty is really the best policy. The thing is, we feel duty-bound to say something about the film as we understand that when marginal blogger gets invited to free movie, marginal blogger gives movie free publicity. Which is totally cool.

We'll go ahead and say that Judi Dench gives a marvelous performance as a lonely spinster teacher who manipulates a younger teacher, Cate Blanchett, into becoming her very best friend. And most everything that comes out of her mouth is certain to be quoted by gay men for at least a few hours.

The rest of the film, unfortunately, is, er, not as marvelous. Had we paid to see it, we might say something like "Philip Glass not only phones the score in, as per usual, but phones it in WITH THE VOLUME TURNED ALL THE WAY UP" or "It's difficult to care for two pathetic characters to begin with, but even more so when neither has been properly developed." But we won't. We'll just urge you to see this film for Judi Dench's wonderful performance. And hope that maybe, just maybe, we'll be invited to see another movie that we can actually talk about, if you know what we mean. 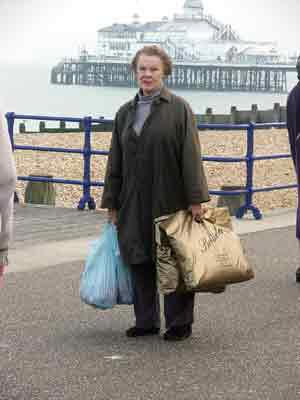