This is a story of how procrustean morality, hidebound teachers and prudishly fumbling parents cause despair and death among betrayed youth in puberty. Though the plot remains largely the same, retaining period and place, it clashes with the standing or hand-held mikes.

The sundry diminishments and a new ending that contradicts the play's thrust are, I suppose, meant to be compensated for by the songs. Steven Sater's lyrics, however, are pretentiously pseudopoetic when, despite miking, they can be heard at all.

Although I have scant use for rock music, and less when it's in the theater, Sheik seems to have done well by those who care for it. There is even one number, "There Once Was a Pirate,'' which, regardless of irrelevance to the plot, is lovely by any standards.

With rather too minimal scenery and questionable disco lighting, the show nevertheless gets good direction from Michael Mayer, though Bill T. Jones's grotesque choreography is hardly to everyone's taste. The enactments of misguided adults and confused juveniles are commendable, even if having all grownups played by two actors smacks of contrivance. Outstanding is the leading youth, splendidly sung and acted by Jonathan Groff.

If anything surprised us about this review, it was how tame it was in its distaste for the show. Simon knows his theater history and his languages, and we did not expect him to be amused by Duncan Sheik and Steven Sater's playful updating of Frank Wedekind's German play.

Nonetheless, Spring Awakening was a modest hit off-Broadway due to other more positive reviews. The producers ambitiously decided to move it from off-Broadway to Broadway, where it's technically cheaper to produce a show because of the larger amount of seats available for each performance. The Broadway production was re-reviewed by all the major critics who generally loved it more than they did the first time. We were looking forward to seeing John Simon's review most of all as the production, in its move uptown, cut the one song Simon seemed to kind of enjoy. 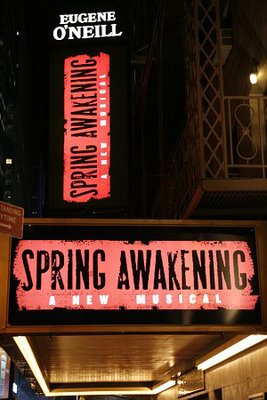 Well, Simon did re-review it. Maybe. Someone named John Simon did. To understand our confusion, here's the full second review—were not going to post it in its entirety because it's too long. We will, however, post relevant excerpts:

Shows can be innovative without being good or vice versa. But when "Spring Awakening,'' a new musical, is both, it is grounds for cheering. Steven Sater, librettist and lyricist, and Duncan Sheik, a pop star and serious composer, began turning it into a musical in 1999. After many workshops, concert performances and delays, "Spring Awakening'' opened last summer at the Atlantic Theater Company and was an instant success.

But what is gained is Sheik's propulsive alternative rock score, which knows when to soften for romantic or wistful numbers. Cannily orchestrated by Sheik, with adroit vocal and additional arrangements by AnnMarie Milazzo and Simon Hale, it achieves a seductive sound that most recent Broadway musicals have lacked.

Sater's verses are nothing if not lyrical, sometimes even a bit too sophisticated for the kids from whom they issue. Wendla's "Oh how we/ Fall in silence from the sky/ And whisper some silver reply,'' and Melchior's response, "Window by window/ You try and look into/ This brave new you that you are'' are cases in point.

There is inventiveness in the alternating use of body, handheld and standing mikes, in the way disparate actions are shown contiguously or in bold crosscutting. Bill T. Jones's youthfully evocative choreography -- it is unlike the dancing anywhere else on Broadway -- is idiosyncratic yet mesmerizing and deserves its own accolades for advancing the form. Kevin Adams's lighting, enhanced by a good deal of neon is, well, electrifying, and Susan Hilferty's period costumes are scrupulously appropriate. Christine Jones's set largely replicates the look of the Atlantic's theater, an intimate desanctified church, which seems entirely apt given the importance of religiosity, imposed and rejected, in the play.

Yeah, that last bit's our favorite. The choreography has gone from "grotesque" to "idiosyncratic yet mesmerizing." The "questionable disco lighting" is now "electrifying," and the "rather too minimal set" in a small off-Broadway house is now "entirely apt" in a huge Broadway one.

Hey, whatever, right? People change their minds. Absolutely. And we encourage them to do so. And we're thrilled that John Simon RILLY liked the musical the second time. But, for those of you who know Simon's record, he is an unsympathetic brute. He has laughed off Stoppard and Kushner, trashed Albee and dismissed Miller. This change of heart over a musical we thought he'd crush between his pinky and ring finger is significant because it either shows he's getting kinder with age, or, more likely, he's going senile. Whichever the case may be, these reviews, written only several months apart, make for some clearly hi-larious comparing and contrasting.

Most of all, go see Spring Awakening. The score is the best theater score written so far this decade, and everything else about it, especially the idiosyncratic yet mesmerizing choreography, is unforgettable. And, no, in case you're worried, we are not Duncan Sheik fans. But you don't need to be to enjoy this show. And if you don't like it the first time, maybe you will the second, you old coot... 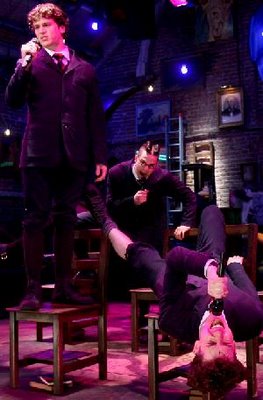 Have you seen this show on Broadway yet?

I can understand how some of the issues he highlighted at the Atlantic became non-issues at the O'Neil. The "disco" lighting has gone a step further, and now the lighting is such an essential character in the play, surrounding us and bringing us intimately into the folds of the story..wouldn't be surprised if the lighting gets a Tony (one of many, I predict). The choreography is deceptively simple..it helps to tell the story beneath the surface of these characters and captures the trembling hormones which threaten to break forth. I can see how someone seeing it for the first time would miss its understated elegance and impact. One of my friends, for instance, didn't even notice that the same movement was repeated throughout..he didn't remember there being any choreography at all at the top of the show ("Momma Who Bore Me"). Simon has not gone senile. This is definitely a show that gets deeper and deeper upon repeated viewings. I'm on my third! Go!