Clearly we're thinking about one thing. Well, besides alcohol. Lost! (Don't worry—this will pass at approximately 10:01 p.m. tonight when Angela and Jeffrey are put back in the same room yet again.)

In this article from Zap2It, we discover that J.J. Abrams actually co-wrote tonight's episode (virtually guaranteeing a Keri Russell appearance) and that, according to Abrams, "As it goes on this season, especially where it goes, I'm looking forward not to just directing an episode down the line but—we have a structure in place for the remainder of the year, and I think when we get to the end of the season it's such an exciting an unbelievable conclusion... I would love to be able to work on the finale."

Oh, and here's another attempt at a recap. Eh. We can name that recap in ten words: 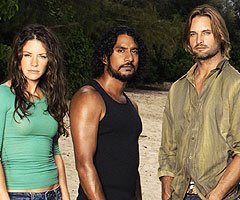 Keri Russell on Lost? That would be way too good to be true!