Well, folks, after 92 weeks, the third season of Project Runway comes to a close tonight. Who do we think is going to win? Can someone remind us who's playing? 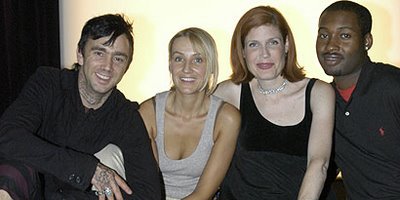 Michael? No. His final collection was too hooch. And, sorry, he's boring. But we're glad he got braces. His grill has been driving us bananas since week 34.

Uli? No. We love that she finally used her name as an adjective in week 87, but she should stay in Miami and make beach dresses for the assistants at Ocean Drive. Uli as winner = Chloe as winner and not because we can't understand a word that comes out of either of their mouths. Because zzzzzzzzzzzz.

Laura? No. She does one thing and, even though she does it very well, it's still one thing. (We're talking about making babies. Just to be clear.)

Jeffrey? No. Like his neck, Jeffrey's designs have been indecipherable and inconsistent. They're occasionally thrilling, yes, but they're also occasionally Angela's mom.

Which leaves us with...oh. We have to pick one of those? Really? We can't pick Santino?