Sorry! We jumped the gun. Apparently Britney Spears would like to play Elphaba, the green witch, in the film version of the Broadway musical Wicked. If there's anyone who can make those songs worse than they already are, Britney's the gal. As well, it's pretty much the only way in hell we'd ever even think of sitting through another version of Wicked again, so, producers, if you're interested in us attending, which you obviously should be, you best cast Mrs. Federlines stat. 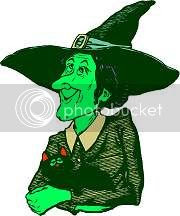