We were listening to the Shock Treatment soundtrack yesterday (mostly because we adore Jessica Harper—if you haven't seen Phantom of the Paradise or at least heard its wonderful Paul Williams score, shame, shame, shame) and decided to do some exploration. Minimal, of course. But we found this bit of interesting potential ephemera: it's the first draft of the intended proper sequel to The Rocky Horror Picture Show, entitled Revenge of the Old Queen. (Shock Treatment, originally called The Brad and Janet Show, was more of a follow-up.) We'd heard about this sequel for years and eventually figured we'd just made it up so as not to allow that part of our brain to remain available for processing actual emotion. Alas, it turns out there was to be a sequel, but after Shock Treatment's failure, 20th Century Fox didn't want to do the Time Warp again, so to speak.

Anyway, we didn't read the script, obviously, and we don't plan to, obviously, but it is kind of cool to see lyrics to new Rocky Horror-esque songs, like...

IT'S TERRIFYING GETTING TACTILE
WITH A MARTIAN PTERODACTYL

OK. Maybe it isn't. Well, you know, it's fun to find something you didn't think existed. Right? Jessica Harper? 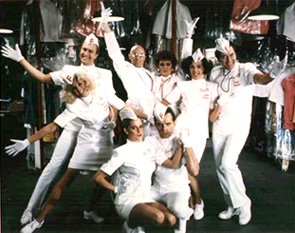