In the Kansas City infoZine, writer Liz Sweeney has this to say about actor Tony Yalda's character in the recent American Dreamz:

He is mistakenly recruited as a vocal contestant in place of his faggy cousin Iqbal, played by Tony Yalda, who ambushes every scene with his chichi charisma.

Now, the fact that this line comes from a positive review of American Dreamz is not what troubles us. It's the use of the word "faggy," ostensibly to mean "rilly gay," that concerns us. infoZine, despite its possibly misleading name, is not an urban publication like, say, Atlanta's Creative Loafing or Miami's New Times. It's "Greater Kansas City's User-Driven News Force," and it has recipes. Alas, it's not being read only by the kids. It's for the general public. "Faggy" is not a word we deem acceptable for everyday use by non-faggy publications. You may think we're being completely hypocritical, but, believe it or not, some words to us are verboten. For every "faggy" we may offer, there are several "pickininnies" or "sand monkeys" you'll never hear referred to on this site. It's just not cool. As well, we'd have no problem if Ms. Sweeney had written "American Dreamz is completely boring and totally gay." Everyone knows that the use of "gay" to mean "retarded" is totally acceptable anywhere, anytime. But "faggy"? Nope. Certainly a writer contributing a review of a mainstream film to a mainstream rag, even one in Kansas, should know better than that. Stupid cunt. 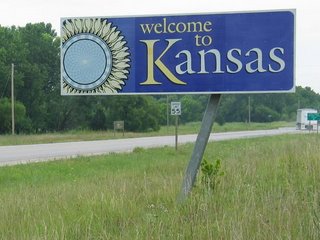 While there is a Kansas City, Kansas, I'm guessing the KC Infozine is from Kansas City, Missouri. Oh who the hell cares.

Of course it is, but we have friends in St. Louis.