So, let's talk about tonight, shall we?

If you want to be like us, here's the schedule:

8 p.m.: America's Next Top Model
Tonight's episode features one of the bestest segments of the entire season: the makeovers. Get ready for glamor, extensions and cryyyyyyyyying! The CW's Web site has posted a sneak peek of tonight's episode, which is nice and all, but it's nothing compared to our blogfriend Rich's compilation of the best Tyra moments from last week's episode. (Rich is the reason why we don't even attempt TV show recaps. Please visit his site, Fourfour, if you haven't already to see why.)

9 p.m.: Lost
No, it's not a new one. But it is a recap episode. Meaning, you get to watch in one hour all the final two minuteses of every single previous Lost episode. You know, the only two minutes that matter. This should be especially exciting to those of you who've never seen an episode. Unfortunately, we have to assume that Michael will be included in the recap. (Couldn't NBC have produced some Webisodes on which we see Michael and Walt's boat sink followed by Michael quickly drowning and Walt being rescued by a unicorn porpoise who brings him to his thoroughly less annoying mother?)

Oh, and we don't have any best-of-Tyra video for this one. You'll have to do with Lost marriage spoilers. 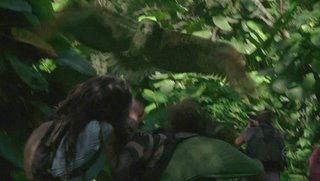 10 p.m.: Project Runway
Yes, it is a new one. And we find out who the top three finalists are. Finalistly. Our initial prediction was Michael, Uli and Laura. But we're going to confidently say now that Michael, Laura and Jeffrey will be our three finalists. We say Laura and Jeffrey because in this week's New York Magazine, Laura accuses Jeffrey of outsourcing his collection and Tim Gunn admits that when he visited Jeffrey three weeks prior to Fashion Week, his collection was far from complete. We wouldn't have complainer or complainee if either had been eliminated. Michael impressed the judges enough that they'll pass him through.

Oh, if we only knew as much as we do about Project Runway about anything actually important to society.

Ah, well. That's our plan. And if you want to be just like us, you'll include Andre champagne and some peach or mango juice to create a perfectly delicious What Happened to Andre.

I don't try tv recaps for exactly the same reason. Although I do go to salon and occassionally bitch about ANTM and even get Editor's Picks for doing so! woo!