Of course we watched the first episode of the third season of Project Runway last night, and we have six words (preferably sung): 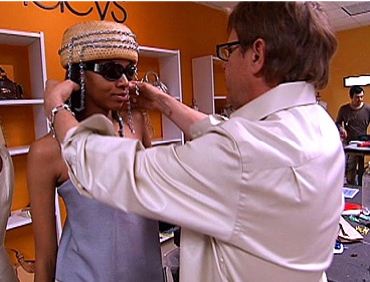 You know, we have to give credit to Vincent (the first Runway contestant who might be honestly, veritably, certifiably insane) for sticking a basket, with decorative chain, on this lovely girl's head and parading her before Nina Garcia, Michael Kors and Kate Spade. That's some moxie. Oh, right, it's insanity. We already figured that out, didn't we? Never mind. 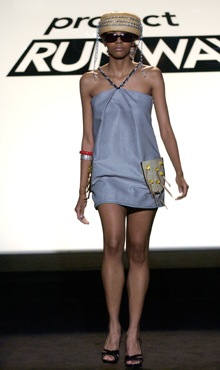 (The challenge, in case you didn't have cable, Tim, was for each contestant to design a frock using anything from the apartment in which he/she/it is staying. Again, we long for the day when the contestants get to design a dress made from actual material, not lilacs or lamps.)

Anyway, there were also 14 other contestants last night. Here's what we remember:

•One has tattoos on his neck. One says "Detroit." And he wears a hood. And he's white.

•The token black is a male, this time. He's named Michael Knight. As in, "Please bring me the embroidery scissors from the Macy's Accessory Wall, KITT."

•There's a 42-year-old with five children who's going to use the "I have five children" card a lot. A LOT. Unfortunately, this is not a show where that matters.

•The guy who designs Barbie clothes for a living started out hilarious and ended up inducing sleep, probably much like the arc of his job.

•Some girl got kicked off.

•We don't remember any names except Vincent's, Michael Knight's and a guy with two first names, one of which is Keith. Toby Keith? Keith Richard? Michael Kors?

•Speaking of! Michael Kors's enormous head has somehow gotten even bigger. And gayer.

•Vincent is clearly our favorite so far. We do not envision him making it past episode three. Which means some other people better become interesting real fast. We remember last season's first episode being much more compelling. Perhaps because 94% of the contestants weren't already established designers.

•Eh. Now we're trying to hard too remember crap, which isn't conducive to the high humor standards we have for this site.

The bottom line is we're glad the show is back. The group we had over cheered upon Tim Gunn's first "Make it work" (and then, yes, took a drink). And, obviously, we're most excited about having a weekly source of inspiration for new fashions. Why, today we're sporting an elegant yet sporty, functional yet fancy, chic yet approachable...

I've only watched the 'Road to the Runway' ep so far and... was the hood guy's hood pleather? Where do you even get one of those? Perhaps more importantly, why is such a thing available in the first place?

I just thought you should know my friend and I spent the entire weekend punctuating any conversational pause or witnessed fashion don't with "BAAAAAAAAAAASKET HAAAAAAAAAAAT!"

I suppose it was obvious that we had been drinking.

my friend made the observation that kors' head looked like a basketball, due to its huge orangeness.