First of all, kudos to Mandisa for singing "I'm Every Woman" on last night's "American Idol." No joke we could write could top that. So, thanx.

Second of all, we watched Crash last night. We think it's about racism, but we're not 100% sure. If only it could have been a little more unelegantly blatant, we might have gotten the point.

Third of all, UPN has so kindly provided a promo photo for tonight's two-hour "America's Next Top Model" premiere. As you may know if you're a devoted reader of this site (and god help you if you are), the first photo shoot will require the contestants to go bald. Initially we assumed this meant the girls' hair would be completely disposed of, which would have provided enough entertainment for maybe a month. However, we've since come to learn that no hair will actually be cut—the cue-ball look will either be the result of a bald cap or Photoshop. Eh. Anyway anyway anyway, the promo photo provided by UPN ties in with this theme. Are you ready for it? Really? Because it's a good one. OK. Here goes. Please swallow anything you may be drinking. 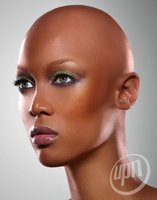