Good morning. How about those Sopranos last night? Huh? Right? Let's go over the good and the bad...

The good:
•Carmela is back—the hair and the clothes are bigger and better than ever. And the Porsche Cayenne! "Like the pepper."
•Lots of Ginny Sack!
•The perfectly realized suburban sushi restaurant that Tony and Carm are addicted to.
•Vito's weight loss. And his shiny suit.
•Bobby's model train hobby and his engineer's cap.
•Tiny Frankie Valli!
•Less than a minute of Meadow!
•And, of course, the ending! The gremlin-esque Junior retreating to the closet was easily one of the most hilarious/heartbreaking/terrifying moments of the series so far. Nicely done.

The bad:
•No Ro!
•No Ade (except for her brief appearance in Carm's nightmare in which her fadeout looked like it was done on iMovie).
•Carm believing Ade is merely missing after a year-and-a-half. Yes, Carm's existence is founded on denial, but this didn't quite fly for us.
•More than 0 minutes of Meadow.

All in all, a success. It's so nice to once again be in the company of the most dispicable family ever. Now, if we could just get busy with the kidnapping-and-throwing-off-a-cliff-of-Meadow storyline, we'll never say a bad thing about the show again. 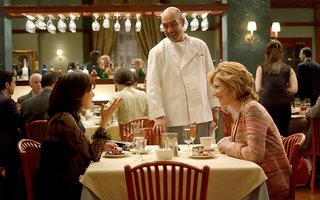