Grody to the Max.

OK. The NB has officially entered the big time. Look what we found in our inbox today regarding an earlier post linking to a tabloid story, not written by us (obviously), that Prince Max of Austria was dating Liza Minnelli:

under your online-services, http://nervyb.blogspot.com/, you have posted the following information with a copywritten picture of the prince:

"Liza with a zzzzzzzzzzzzz.
It's confirmed: Prince Max of Schaumburg-Lippe is gay.
posted by The NB at 1/06/2006 1 comments".

The prince and especially his girlfriend request the immediate deletion of the content mentioning him and requests information about the person giving unauthorized comments or missinformation. Nevertheless he will be happy to answer your questions for a new and correct quote through his media reps (media@princemax.com).

If the following data, from the message posted by you: http://nervyb.blogspot.com/2006/01/liza-with-zzzzzzzzzzzzz.html will not be removed within 24hours the copyright infrigement will be reported to the public prosecutors and police and the malicously wrong content will be followed up in a civil law case. A New Yorker attorney has already been appointed in your case. With best regards, Wagner, Esq. Dr. of Law

Anonymous said... Wrong: Liza´s´Prince is 100% straight! I know his girlfriend. He is just a fashion and style freak.

Oy! All this girlfriend talk! We get the picture, Prince! You're straight! Good for you.

OK. First of all, your highness, why are you doing own Googling? Isn't there someone to do it for you? We know you're doing it yourself because words in these "cease-and-desist" letters and words on your HI-larious Web site, princemax.com, are spelled incorrectly. We are honored to have had a "New Yorker" attorney appointed to our case, though, Prince. They're the best. They once got Lillian Ross out of a nasty situation with J.D. Salinger's "anti-Semitic" dog.

Also, does your lawyer, "Wagner," have a first name? Like Jack? He's hot. Or is "Wagner" his first name? 'Cause that's kind of hot, too.

Also, if you're going to comment on this blog, would you please use your real name? Or would it not let you enter the full 14 parts?

Also, and most importantly, WHO CARES?

The thing is, Prince, we'll remove the offending post, but if you want to silence us (and, believe you us, there's a long line of people in front of you but for different reasons), there are more cordial ways of going about it. See, here in America, people aren't as aggressive as they are in Austria. In Austria, it's all like, Oh, I don't like that Jew—I'll kill him. Here, we're more like, Oh, I don't like that Jew—I won't go see his movie. That's all. No harm done.

All right, Prince. Thanks for the hilarity. Stay gold, and keep reading!

Oh, and here's a pic of you with some socialite. We got it from the Daniel Benedict-/Andrew Saffir-infested New York Social Diary, so a) it's not copyrighted and b) if we were you, we'd be more concerned with our image appearing on that crapfest than on this one; people actually read that site and would be more likely to notice your penchant for older women there than here. 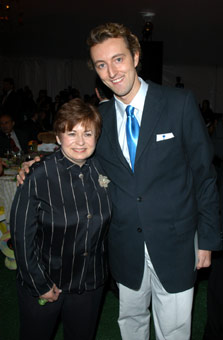 Yeah, he doesn't look gay in that picture either.

Nah, he doesn't look gay. No rich gay man would dress like that, I don't think.