Laryngitis is the new rheumatoid arthritis.

Occasionally, occasionally, we head over to the pathetically hilarious All That Chat forum, the Interweb's premier online theater discussion. Today, someone posted about seeing a number of shows in London from which we excerpted this marvelous bit (edited for your sanity):

Friday we were supposed to see the first preview of Who's Afraid of Virginia Woolf but it didn't pan out. Got to the theater 15 minutes before curtain to find out it was cancelled... we were told it was due to Kathleen Turner having laryngitis but we saw her that morning at Harrod's buying cheese.

Hmmm. One doesn't usually prescribe dairy to one affected by an ailment of "la voce." Call us crazy, but we have been known to, after a night of alcoholism, grab a block of cheddar from the fridge and dig in. Ergo, wethinks perhaps Ms. Turner didn't so much have laryngitis as she had what's commonly referred to, at least in America, as a hangover. But don't tell her that.

Best of luck to the entire cast. 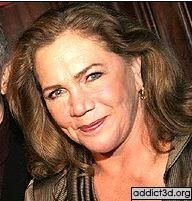