The Kimes, they are a-changin'.

People, don't forget that tonight at 9 p.m. on Lifetime, Judy Davis stars as Judy Garland starring as socialite-killer Sante Kimes in A Little Thing Called Murder. Yes, this is the second made-for-TV movie chronicling Kimes shenangians—Mary Tyler Moore camped it up in 2001—but this film aims to cover Sante and Kenny's entire run as America's favorite mother/son murdering team. Adding to this magic, the film is directed by Richard Benjamin, auteur of such gems as My Favorite Year, The Money Pit and My Stepmother Is an Alien. And, it's a comedy. Bravo, Lifetime. 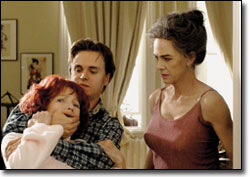