If you don't know us by now, you will never, ever know that we adore the Australian sitcom "Kath & Kim," starring Jane Turner and Gina Riley as a classless middle-class mother and daughter in Fountain Lakes near Melbourne. Seasons 1 and 2 of the sitcom have run in the US on Trio, but season 3 has yet to be seen here. Until December, that is! Sundance Channel will air season 3 of the Australian hit beginning December 7, with an episode entitled "Cactus Hour." The best part of this wonderful news? No commercials, ploise!

Once you've enjoyed season 3, you'll be ready for Da Kath & Kim Code, a 90-minute telemovie, which chronicles the adventures of Kath & Kim following their overseas Da Vinci Code tour. The movie premieres in Australia on November 27. No word on a US premiere, but if you're one of those people, you can start an ineffectual Internet petition to send to Sundance to insist they play the movie.

All in all, this news is the boies knoise, indoid. ROCCO, LEAVE LOLA'S TRAINING BRA ALONE GOD DAMN IT! 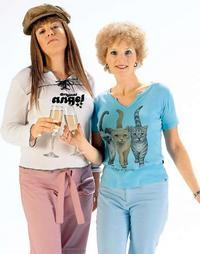