This response is from 74-year-old Candace Colliers.

I know you're probably surprised that such an old lady can read the blogs and use the e-mail, but I'm no fool. Speaking of surprises, imagine my surprise when my retirement community had a trip to the county fair a few months ago and these adorable twins got onstage and began to sing. Well, it seemed truly special. Now, they didn't necessarily play their instruments well or even sing on key, but it was the effort that counted. However, when they began to sing about how "rad Hitler was" and how "S.S. stands for Super Solution," I got a bit suspect. And even though I'm an old lady, my hearing aid misses nothing. NOTHING. Well, as they continued to sing about this trash, people began to boo and hiss. I joined! Of course I did. After a few minutes of this, we drowned those two little white witches out. They began to stare at us in a daze. One of them began to spit and the other started kicking the air. The one with with fiddle—the kicking one—also began to swing her bow wildly. We got louder until the two mini-Goebbels left the stage. We couldn't believe what had happened! These were somebody's children, somebody's grandchildren! Let me tell you, if my grandkids turned out to be twin racists, I would possibly never speak to them again, and it's not just because I think twins themselves are the work of the devil. There's no reason for such pretty young girls to be spouting such vitriol! Shame on them! Shame, shame, shame! 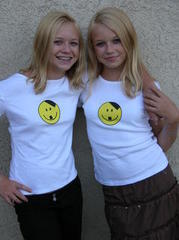