Shut up and put your TARDIS in me.

A new late-night series called "Torchwood" has been commissioned by the BBC. It will be an adult version of the BBC's popular and completely-hilarious-if-you're-an-adult, completely-terrifying-if-you're-a-child "Doctor Who" series. "Torchwood," which is an anagram of "Doctor Who," will feature swearing and sex, all the staples of a good adult show. It will star one of the current "Doctor Who"'s actors, John Barrowman, so we're assuming "Torchwood" will feature lots of gay sex and gay swearing, especially as the show has the gayest name ever, "Torchwood."

Anyway, this post is basically just so we can write "Torchwood" a lot of times and provide links to fascinating info about, and a sound file of, one of the best instrumental theme songs ever written. 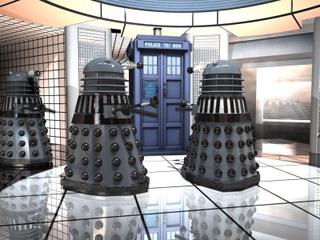