Brooklyn Academy of Music announced its lineup for the 2006 Next Wave Festival. Or, as we like to call it, the annual "Productions with No Sets" festival. After all, that shit's expensive!* 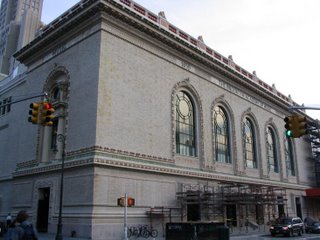 *Yes, we once worked at BAM. We grew tired of making less than $10 an hour and staring at the backstage wall of the Harvey Theater during every freakin' production. We know how much money BAM gets a year, but we still have no idea where the bulk of it goes unless Philip Glass is charging by the note.
Posted by The NB at 6/02/2006