We get so much guff for our sick fascination with Clay Aiken that we'll respond to that by posting some Taylor Hicks news. Who's Taylor Hicks? He's the 63-year-old who just won American Idol. Remember? Anyway, apparently he told People magazine about a crush he had on a girl who he'll never forget. Well, the girl, Christy Lee Worsham, contacted People magazine two weeks after the story ran and said she was surprised she had made such an impact on him. She also said, "He was such a fun kid," Worsham, 32, said. "I'm married. But I'd like to reconnect." No shit.

Zzzzzzzzzzz. Come on, isn't this more exciting? Yes, it is. 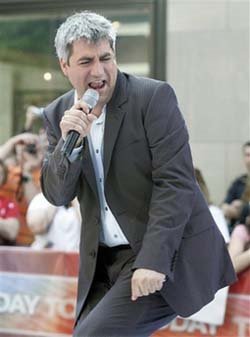