Here's a pic from the November-scheduled For Your Consideration, Christopher Guest's latest film with all your favorite Waiting for Guffman, Best in Show and A Mighty Wind stars, plus Ricky Gervais... 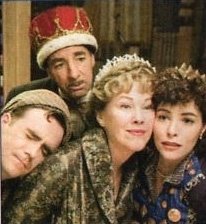 We've known about this for a while, but what we didn't know is that this film was not shot in the mock-documentary (the word "mockumentary" will never appear on thi...shit) style of the aforementioned films. Initially disappointed, we're now looking forward to seeing how the expected wacky improvised shenanigans (WIS) will come across in a "real" film. Dare we say, this could finally be Guest's shot at an Oscar nom? Eh, we're just really excited about Gervais. And Catherine O'Hara, or, as we like to call her, St. Catherine. Amen.
Posted by The NB at 6/02/2006