We're going to start the day with a little nostaligia. Blogger and music critic Mark Blankenship (a friend of a friend, so be nice to him even if he hates your favorite band) recently posted a sort of tribute to our favorite band of all time, 10,000 Maniacs. There's really not much we can add to his post, because it's rare that 10,000 Maniacs get (or even ever got) much attention at all. We're just elated that he sees fit to recognize the band for its pretty spectacular output. The Maniacs recorded and performed from the early '80s until, well, now, except that the voice of 10,000 Maniacs, Natalie Merchant, exited the band in 1993, following the release of their Unplugged record. (For the record, in our opinion, which is the correct one, Merchant's solo stuff doesn't hold a Bendel Vanilla Bean candle to her Maniacs work.) He does call Our Time in Eden the band's masterpiece, which is incorrect (oh, snap!). 1985's In My Tribe is the band's shining moment—it includes "What's the Matter Here?", "Like the Weather," "Don't Talk," "Hey, Jack Kerouac," "Gun Shy," "My Sister Rose" and a personal favorite, "The Painted Desert." In My Tribe really defined the Maniacs unique mix of social commentary and melancholic celebration. All with a singular folk-pop sound. The 10,000 Maniacs folk-pop sound, if you will. And you will. 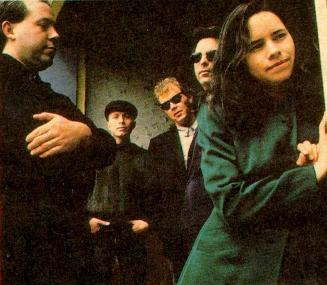 ADDENDUM:
Longtime reader Tim wonders why there's no mention of 1985's The Wishing Chair either on our post or on Mark's. Good question, Tim, and thanks for asking. We can't speak for Mark, but we left it out because we're lazy. The Wishing Chair truly is another incredible Maniacs record (though the group still included member John Lombardo at that point) and is definitely the record that bridged the band's more punk-rock-folk-reggae college sound to the more focused folk-pop sound they'd come to be known (or not known) for. It is a varied effort, for sure, but one that newly rewards the enthusiast upon each listen. (Can you believe we just actually wrote that last sentence? Hi-larious.)
Posted by The NB at 6/30/2006