We could go with the obvious here: that 42 is the Ultimate Answer. But that would be easy. Instead, we'll link you to this Web site: 42D. It's entitled "The Girls of 42D," and it features a bunch of girls who apparently lived together once, presumably in an apartment called 42D. This is our favorite kind of Web site: a place where random people post pics of themselves in "fun" situations, like when all the girls dressed up for an '80s night. You can also choose from Mardi Gras, Ghetto Fabulous Style and Luau (and those are just a few!). It's bananas.

There are lots of other links to choose from, too! Like We Know We're Obsessed..., which is a list of ways the girls know they're obsessed with someplace ostensibly called Howl at the Moon. It's riveting.

The main reason we like this site, though, is that Michele, one of the girls of 42D, chose this photograph to represent her... 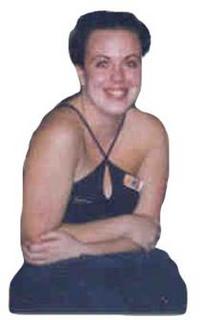 If that's not shocking, we don't know what is. In fact, we think this reference to 42 may, in fact, hold the key to the "Lost" numbers. What would be more surprising and frightening than going down a newly opened hatch on a mysterious island to find Michele, Allison, Amy, Bridget, Theresa and Jess chugging drinks in their "going out" clothes? Abrams, you may be one step ahead of everyone else, but wethinks we may have just cracked the code...
Posted by The NB at 9/21/2005

Imagine my surprise when my good friend from college called me to say that our website made it to someone's blog. I will admit we laughed for a good 20 mins about it. Thanks for appreciating the site.. we made it senior year in college during what we called "snow dementia". We had class cancelled for at least a week with a few feet of snow outside and couldn't go anywhere. It started as a joke about the dumb college girls that think they are so great. But we continue to keep it updated because everyone (such as yourself) gets such enjoyment out of it. Thanks for the recognition!

Allison said...
This comment has been removed by a blog administrator.
11:16 AM

Um, I reserve all rights to mocking Michele and I don't remember this being run by me...