We have to love Kate Moss for admitting, after being caught on camera and video sorting cocaine, that she uses cocaine. The whole thing was rather iffy until her admission, so we thank her for her candidness. In another brave act, Kate has allegedly re-dumped her drug-infested boyfriend, Pete Doherty, who is in no way being used as a scapegoat for Kate's drug use, which, by the way, is not speculation. She admitted to it over the weekend. In other news, Doherty has no idea any of this is happening, as he was last seen doing lines of coke off Kate Moss' ass, which she says is perfectly healthy for her and her daughter. 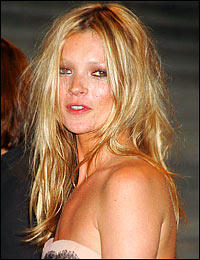