As Liz Smith would say, Kudos to "Lost" for a great episode and especially that brilliant opening sequence! We thought it was just another flashback, but it was really a glimpse into an IKEA-furnished apartment, complete with washer and dryer, at the bottom of the hatch. Or was it? It was never really established that that's what's down there. Sure, there was what seemed to be an explosion that rallied the inhabitant into action, but we only saw the shaftway below the hatch when the guy was looking through his telescope/periscope system. What Jack found at the end of the episode was a dome that had the same kind of computer, complete with "Execute" key, that the apartment had, but which was absolutely not the same computer. Which leads to the question, was "Desmond," the guy who was holding a gun to Locke's head at the end, even the same guy we saw in the apartment at the beginning? And what of the hatch reading "QUARANTINE" on its underside? Does this mean the inhabitants of the island are quarantined, and the person listening to Mama Cass and eating cereal in the apartment is there to protect what- or whomever from the islanders descending into the shaftway? The guy at the beginning did put on a Hasmat-type suit and injected himself with some sort of prescription before looking through his telescope. And did you notice the prescription vial had the numbers on it? Oh, yes it did. Oh, yes it did. Obviously we can't wait until the next episode, mostly because we're dying to find out if the apartment has a dishwasher or if the guy was just cleaning his cereal bowl in the sink because it was quicker... 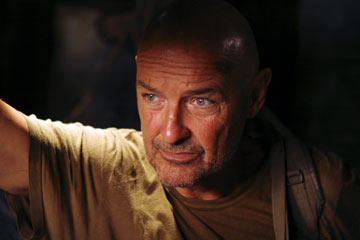 As for "America's Next Top Model"...
The good:
•Lesbian with open relationship
•Awkward blonde with collagened bottom lip who'd never met a gay person before but who TOTALLY made out with aformentioned lesbian
•Coryn's eyebrows
•Tyra calling Coryn Groucho Marx because of aforementioned eyebrows
•J. Alexander's detachable-flower corsage
•Lots of jubilant girl-screaming

Tyra, Kenny Rogers once said, "You gotta know when to hold 'em, know when to fold 'em." We realize that Janice Dickinson probably wasn't a walk in the park, but she was an ace to Twiggy's 2. Last night's judging sequence was more like a PTO meeting than a PLO one. That's not gonna work, sweetheart. We want America's Next Top Monster back. Stat.
Posted by The NB at 9/22/2005

Twiggy is THE most boring judge I've ever seen. She needs to be cut from the show PRONTO!
And you really need to watch this week's Surreal Life. I'm not kidding, Janice and Balki were sitting in a room somewhere and Janice was hysterical crying and telling him about her childhood and then all of a sudden Balki starts sobbing like a baby and curls up in the fetal position. It was UNREAL.

I somehow got sucked into reading the "official" Lost message board (at www.oceanicflight815.com) and was reading all the wackjobs' conspiracy theories. The amount of shit they notice on that show is amazing. But, it is pretty cool to read what they think the mysteries are and how things tie together.