We paid a visit to one of our favorite places today: the Web site for the Bucks County Playhouse. You may remember the attention given to the site last year when Joyce DeWitt starred in a production of Gypsy there. Or you may not. In any case, today's visit netted two wonderful items:

1.) A tribute to Don Knotts, created by a woman named Belinda Balaski who starred with Knotts in 1977 in a non-comedic play called A Good Look at Boney Kern. Here's a moving anecdote from Belinda:

We would always have to hold the opening line when he appeared on stage because the audience would begin to laugh uncontrollably. It was from years of relating to him as Barney Fife, although he would only stand there and do nothing. After that, he was able to "get them" into the play and soon they would forget his comedic side... he just loved that and wanted to do more serious parts.

2.) The cast list, with headshots, for the current production of Seussical: the Musical. Playing the lead part of the Cat in the Hat is Louis Palena, a proud 10-year veteran of the Bucks County Playhouse. He looks like this: 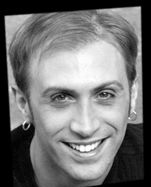 Two bios below his is one for a woman named Jill Palena. She shares the same last name as Louis. She looks like this: 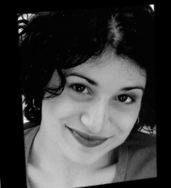 Chances are she is either his sister or his wife. Quite obviously, "sister" would make more sense, but, experience in this field (not to mention what Jill looks like) tells us that Louis and Jill are, in fact, married. We're sure you'd agree. And we wish them the best of luck with that. In a hat. On a mat. Near a bat.
Posted by The NB at 4/21/2006

Hey, I am glad you enjoy the Bucks Web site. I just wanted to let you know that Jill and Louis are siblings and not married. I know both of them well and I am sure they will find it amusing that someone thought they were married. I hope you visit the playhouse soon and see one of the wonderful productions there

Let's hope she got the talent then, because he certainly didn't.

PS - There was no doubt they were siblings. Check the noses.