Oh, this looks like a magical float. It's New York Junior Senator Hillary Clinton dressed as boils. And she's surrounded by what looks like race cars, LEGOs, refrigerators, X-ray machines, dice and robots! 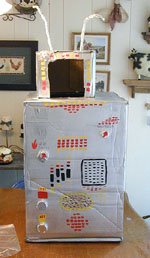 "That's right, NB. I'm proud to be representing the children of New York by showing everyone how many wonderful costumes can be easily made from matzoh! Never have this city's fantastic children looked as good as they do now, in costumes made by them in their own kitchens, or kitchenettes. Here in my great city, we always strive for the best while never losing sight of what's attainable. That's why it's such an honor to be on this float with these children in these costumes made from matzoh. And, best of all, for a week in spring these costumes are delicious with butter."

Well, thank you, so much, Senator.

"I will never abandon our city's children, especially in such a dire ti..."

Oh, we seem to be plagued not only with locusts, frogs and boils, but also with audio problems today. Once we get the feed fixed, we'll return with more coverage. This is some parade! Long, mostly. But great. Definitely great.
Posted by The NB at 4/13/2006