We saw this item this morning and thought nothing of it because we kind of detest Eva Longoria (all 236 of her) and didn't care. But we just re-read it (It's a slow non-news day. If you don't believe us, read this week's Michael Musto column and just TRY to make it past sentence three.) and remembered that she was not nominated for any acting awards this year, unlike her co-stars (we don't count Nicorette Sheridan because they never meant to count her, either), so that's why Marc Cherry has agreed to write her more "fantastic scenes" in season 2 of "Desperate Housewives." Because she wants an acting award. The show's content is going to be at least somewhat influenced by Eva Longoria's desire to have an acting award. Aw. We, and we're sure the entire world, feels completely terrible that Longoria is "Desperate Housewives"'s Kristen Davis, but someone's gotta be the "good sport." We recommend that Longoria take her millions of dollars and cute little outfits and go shut the fuck up somewhere where we can't send a time machine to transport her back to July 2004, otherwise known as obscurity. 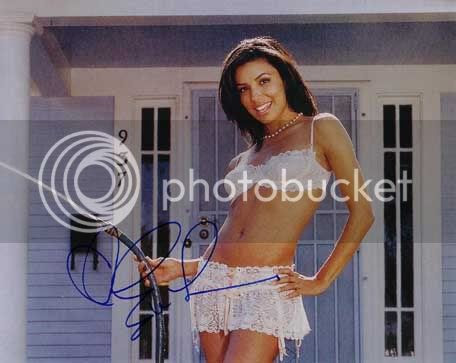