It doesn't go there.

Friend and NB supporter, Michael C., sent us a link to this article that appeared in the Sunday New York Times. Yes, we realize it's Tuesday, but we don't read the Sunday Times or any other newspaper. If there aren't glossy pics of Star Jones in St. Tropez, we're n'interesse pas.

Anyway, the article talks about our most favorite show, "Degrassi: the Next Generation," and how The N, the stateside cable channel that broadcasts the show, edits episodes and rearranges broadcast schedules in order to make them more American-friendly. Meaning, in Canada, the episode in which Ashley had a drug party was not followed by the episode in which Ashley suffers the consequences of said drug party. In America, it was. Now, we knew The N decided not to broadcast the Manny abortion episode (because no American teens have abortions, so playing such an episode would really be pointless), but we had NO IDEA it was randomly toying with other episodes. Shame on you, the N. How are we supposed to know what an erection is if we're not allowed to actually see Spinner's unwanted, classtime erection? You are a cable channel, after all. Act like one.

As you can imagine, we're moving to Canada. Until then, we'll be renting the uncensored DVDs. 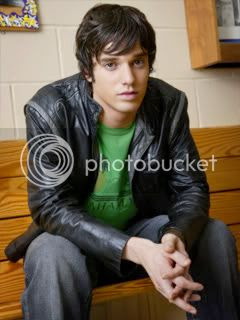 that guy is uber hot.