Yes, the NB is Mariah-heavy of late, but this one takes the cake. And to think it was almost missed because it follows yet another fucking item about that scourge of celebrity existence, Tom Cruise.

Do you remember Mariah's 2001 big-budget movie flop, Glitter? Do you remember why it flopped? Allow Mariah herself to tell you why it flopped. Apparently there are two reasons: 1) It had to do with '80s music, and, because '80s music is only becoming popular again now (?), Glitter was ahead of its time, and 2) well, let's just give a little visual hint: 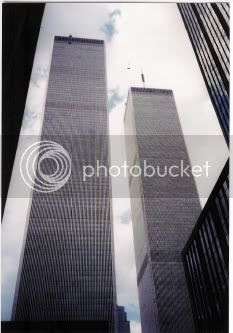 That's right. She believes that because her movie was released around 9/11/01 (on 9/21/01, but still) that ridiculing the movie was an attractive distraction from the dour, depressing news.

God, we love Mariah Carey. We really do. Please let her talk all the time. And Glitter 2: Electric Glitterloo wouldn't be unwelcome, either.
Posted by The NB at 7/13/2005