From page 118 of Heiresses, Heiresses, You and Heiresses and above a giant Paris head: "If you're feeling bored, go to Mykonos or Sardinia or Saint-Tropez. You could never be bored there."

Well. We've certainly never been to Mykonos or Sardinia, though we hear that you should go to Mykonos not necessarily if you're feeling bored, but moreso if you're feeling homosexual. Sardinia has those little fishes, so it's probably cool. However, we have been to St. Tropez, and though we weren't feeling bored when we went, let us remind you how we felt after visiting, via personal pic taken in St. Tropez... 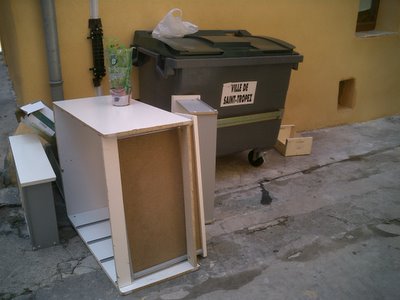 Paris, Paris, Paris. Chinatown on a beautiful Saturday is more pleasant than St. Tropez was when we visited. Being able to buy anything in any store in a town does not necessarily make for a thrilling experience when everyone else around you is a yelling German tourist or an Italian lothario who's been laughed out of Italy. Haven't you noticed that's what was making all the noise? Our Heiress encourages you to avoid St. Tropez at all costs and, instead, if you're feeling bored, go anywhere else, including Mogadishu. We can recommend a phenomenal compound.

Opposite Paris's statement on boredom is a place for you to write "My Favorite Drink Besides Red Bull." Oh, Paris, you're killing us! Obviously Red Bull is our favorite drink but only because we like the flavor—we don't care much for the boost as we ALWAYS get at least eight hours of beauty sleep a night. After Red Bull would come gin and then probably a Lactaid White Russian.