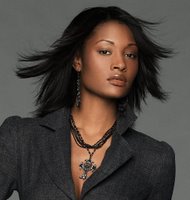 TEFY: She kind of looks like the meanest babysitter ever in her picture. She would defintely cut a bitch. I will be much more interested in her if she throws a fit when some stank bitch pours beer on her weave.

The NB: Babysitter?! Don't people just leave their two-year-olds alone in Arkansas? Isn't that how fire was discovered? Frankly we would never let anyone with whatever that is around her neck near our little Madison and Holden.
Posted by The NB at 2/17/2006