in the midst of all our chain-restaurant-receipt accounting, in-law to be Zach alerted us to the naming of the contestants on cycle 23,253 of "America's Next Top Model." We went to explore, but the amount of Flash animation used on the site caused our computer to start shooting bloody microchips out its vents. As we don't have access to NASA hardware, we're going to have to comment from memory. The Indian girl's name is Wendy. One of the Asians is Gina. One is called something like Nnennnn. And there's someone named Furlanda or Forlunda or Yurlonda, which is awesome. In all, the women look older because, well, they are. Which means the winner, in the actual modeling world, will get even less work than previous ANTM winners. We're still trying to determine if that's even mathmatically possible. 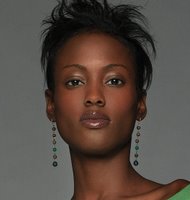