UPNWB, or the CW, has greenlit its first pilot. The new series comes from Sex and the City creator Darren Star and is described as such:

The series, called Runaway, has echoes of freshman hit Prison Break, with a plot involving a family who become fugitives in order to prove the innocence of their father, who has been convicted of murder.

While we can safely promise we'll never, ever watch that, we congratulate young CW on its first steps into the world of broadcasting. One tip: don't call your first show "Runaway." 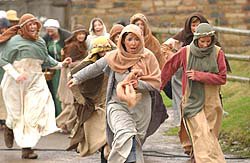