Paris when it sizzles.

Imagine our surprise when, after hunkering down with a gallon of Edy's Slow Churned butter pecan and a veggie mary, we turn on the DVR to see that "American Idol" is two hours long. Truth be told, as we begin to care less and less about the contestants, we really can't be devoting two hours to the show, even if we are drinking. So, FOX, if you could reign it in, that would be great. As it is, we still have one more contestant to fast-forward through.

Anyway, clearly Jesus is working for Mandisa and her pantaloons, but our favorite performance of the evening was obviously Paris's high-spirited, joyous, dance-filled rendition of..."Midnight Train to Georgia." Girl, we never imagined "Midnight Train..." as a song to aerobicize to, but you absolutely converted us. Seriously, your facial expressions alone were enough to keep us entertained for 30 seconds, which really is saying a lot for this show. Keep up the fantastic singing of and non-paying-attention-to-the-lyrics-of the songs you sing. Smoke and mirrors, girl—that's what makes a true American idol. 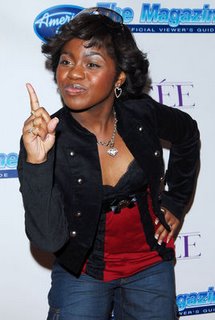