This bit of glory just came to our attention: it's Hilary Duff's blog! Honestly, it's really too much to pick a favorite post, but we'll go with one about our favorite rectangle's encounter with Joey Lawrence and his "trademark line":

Have you seen my latest Ice Breakers commercial? I did one again with my big sister Haylie. Last year’s commercial concept was: “It's liquid, it's ice, its Ice Breakers Liquid Ice". This year we had even more fun because it was even easier. The concept for this year’s commercial is cool too. If you haven’t seen it, here’s the general idea: Haylie and I are at a table and she says, "Check out Ice Breakers new gum." Then I take a piece and chew it and I say “Whoa!" Then Haylie says, "Nobody says whoa anymore". They cut to a monk at a church saying “whoa!” and then to a hippie at the beach saying “whoa!” and then back to us at a table where Joey Lawrence walks in, stops and says his trademark line, “Whoa!”

It’s funny. Joey Lawrence was cool. I almost didn't recognize him. I hadn't seen him in a long time. His hair is short and he was kind of buff. It was a quick two days. The Ice Breakers gum is good. I also really like it because it is sugar free. 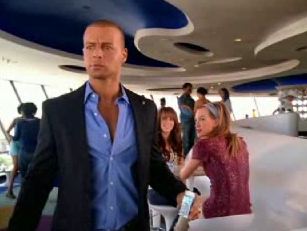