We obviously weren't going to recommend watching or recording the opening ceremony of the Winter Olympics (the what of the who?), but MSNBC is reporting...

The parade of nations prompted a love fest while more than 2,500 athletes arrived to the accompaniment of chest-thumping disco ranging from “YMCA” by the Village People to “I Will Survive,” by Gloria Gaynor.

It turned into a boogie bash with the audience dancing and singing and jumping atop chairs. Everybody seemed to be wiggling to James Brown’s “I Feel Good” and to an Italian version of the disco classic “Gloria."

And, finally, for the last bit of editorial alone...
In what executive producer Marco Bacilli described as an “iconic moment,” silver-clad dancers appeared with big, white bubbles stuck to their heads. Bacilli, who has staged concert shows for U2 and the Rolling Stones, said the balls signified snow, of which there is none in Turin. 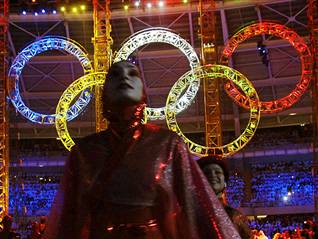